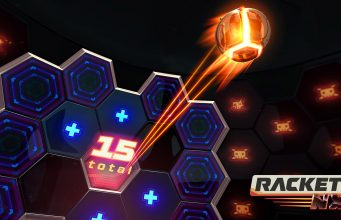 Racket: Nx, a virtual reality fusion of tennis and Breakout, is soon to get a major update with new features like co-op, avatar customization, and in-game tournaments. The studio has also teased that the game is heading to “another VR platform,” very likely PSVR.

Having launched initially in Early Access back in 2017 and then in its full version in 2018, Racket: Nx is by now a VR classic. Playing out like an immersive, 360 degree version of a ‘brick breaker’ game, the sharply designed title has maintained consistently excellent review scores, though it has remained something of a hidden gem.

After its release years ago on Steam, Oculus, and Viveport, the game’s moderate traction seemed sure to keep it from growing beyond its initial scope. But after the game launched on Quest in 2019—and in one year generated 10x the number of reviews as the Rift version—developer One Hamsa is now preparing some major updates.

In an email yesterday (the one-year anniversary of the game’s Quest launch) the studio outlined big changes in store for all versions of Racket: Nx, which are due “in the coming year:”

The studio also shared a new trailer for the game:

And there’s more in the plans, including deeper integration with Oculus’ latest social features to make it easier for players to connect and compete, new options for leaderboard filtering, and improved matchmaking to match players of equal skill.

Included in the studio’s announcements is a tease about the game coming to a new platform:

“Developed a [a Racket: Nx] port for another VR platform, including an extensive language localization system (not out just yet).”

PSVR is the only major VR platform that the game isn’t currently available on, so that’s our best guess for now. This would be a similar trajectory to other indie VR studios with well-rated but lesser-known games which have prioritized getting their titles onto Quest and PSVR, like we see with Until You Fall which will launch on both platforms this Fall.

Developer One Hamsa says that as a small six-person studio, Racket: Nx’s success on Quest gave them the nudge needed to expand the game beyond its original scope.

“[…] with RNX on Quest selling reasonably well, we’ve gained the resources (and confidence) to expand the game further. We’ve actually already started several months ago, with lots of invisible infrastructural work that is a prerequisite to developing the features we’ve mentioned above,” the email read. “But recently the work on these features has started in earnest, and we felt it was time to share the news with you all.”

Racket: Nx on Quest stands as the 9th best rated game on Quest at our last check, holding a user rating of 4.75 out of 5. As a game designed around 360 degree gameplay, Quest’s lack of tether makes it especially well suited to the game.