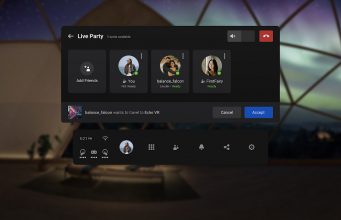 Oculus has introduced new party features which allow groups of players to launch into the same app together and to move from one app to another. Players can now also create Public Parties to discover players beyond their friends list.

Accessed from the headset’s dashboard, the existing Party system allows up to four players to join a group voice chat even if they’re in different apps. Now with the new Travel Together feature, Party members can launch into supported apps together and get seamlessly placed into the same lobby or match.

Of course this only works for multiplayer apps and only among those apps which have explicitly added support for the Travel Together feature.

It isn’t clear at this time if the Travel Together feature is limited to Quest or if it is rolling out to Rift as well. We’ve reached out to Oculus for confirmation.

Oculus has also added an option to make a Public Party. Players from across the Oculus network will be able to browse and join public parties to meet, chat, and launch apps together.

The post Oculus Introduces Group Game Launching & Switching To Stay With Your Party appeared first on Road to VR.