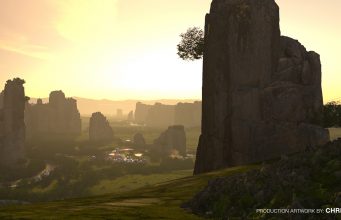 ILMxLAB today announced that its upcoming VR experience Star Wars: Tales from the Galaxy’s Edge is getting a ‘first look’ next week, July 28th, which should hopefully demystify the studio’s next built-for-VR original story.

Update (July 21st, 2020): ILMxLab say that on July 28th via its @ILMxLAB Twitter account it will be showing off the “first story details” of Star Wars: Tales from the Galaxy’s Edge. We’re hoping for a trailer at the very least, and possibly a more granular release date. Up until now, all images have been specified as ‘concept art’.

The Oculus blog post also included a new concept image (created by ILMxLab’s Stephen Todd), showing off what seems to be a base area, embedded above the original article.

Original Article (May 28th, 2020): The new VR experience is said to take place sometime between Star Wars: The Last Jedi (2017) and Star Wars: The Rise of Skywalker (2019) on the planet of Batuu, this time bringing VR users to the outskirts of Black Spire Outpost of ‘Star Wars: Galaxy’s Edge’, the location-based Disneyland attraction. Black Spire Outpost, the largest settlement on Batuu, is an “infamous stop for traders, adventurers, and smugglers traveling around the Outer Rim and Wild Space,” the official Star Wars website says.

The studio says in an Oculus blog post that the original story will include “multiple styles of gameplay and difficulty settings to bring in a wide variety of players” when it arrives later this year.

And if you’re wondering whether this too will be an Oculus platform exclusive, ILMxLAB is working directly with Oculus Studios to make it happen, so that’s a big yes.

“We’re very happy to collaborate with ILMxLAB again on Star Wars: Tales from the Galaxy’s Edge,” says Facebook VP of Content, AR/VR Mike Verdu. “VR is an incredibly powerful storytelling medium; this experience will immerse fans in a deep and thrilling adventure within the Star Wars galaxy, as they are transported to impossible places through the power of virtual reality.”

There’s no word on exactly when it’s set to release, or which platform we’ll be seeing Star Wars: Tale from the Galaxy’s Edge on first. If it follows in the footsteps of the Vader Immortal triology, we could be seeing another Quest-first release.