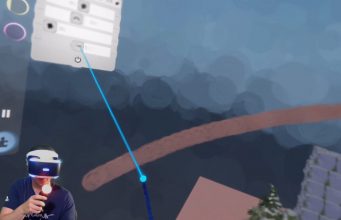 The big PSVR update to Media Molecule’s creation game Dreams (2020) is coming tomorrow, July 22nd. If you’re counting the seconds though, you can catch an insider look right now as Media Molecule is going hands-on with the ‘Inside the Box’ starting experience and a number of the game’s new VR creation features.

In the video, we’re given a timely look at the VR version of the game. The update is coming part and parcel with a new labeling system which lets you easily filter through content, and label your content as both VR-only or VR-compatible. Notably, most user-built content is said to be playable in VR, although we want to see it to believe it first.

The team at Media Molecule went on to show off the creation tools whilst creating a VR experience from scratch, using its new gadgets such as the character tool that lets you snap things in front of you FOV, which is particularly useful for creating your own UI or HUDs.

Another gadget allows creators to sculpt bespoke items and then, for example, bind it to the position of the controller, which can let you create a weapon that is matched up properly with the position of either supported controllers, be it PS Move controller or Dual Shock 4.

The stream is still ongoing at the time of this writing, so we’re watching along with you and updating this piece as we go. Otherwise, the full presentation will be available below in full when it’s finished.

The post Watch ‘Dreams’ Upcoming VR Mode in Action Before It Releases Tomorrow appeared first on Road to VR.